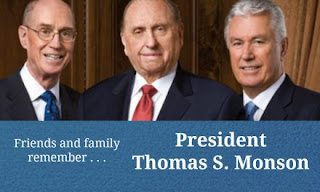 So most of you by now are aware there's been a bit of a fuss over a certain obituary in the New York Times for President Thomas S Monson, and I genuinely have to wonder how many people have actually read the article? Are we reading the same article? From my reading of the interweb it seems a certain paragraph is causing the main concern and while I can in some way see why some people see it that way I am baffled that so many do.

"Facing vociferous demands to recognize same-sex marriage, and weathering demonstrations at church headquarters by Mormon women pleading for the right to be ordained as priests, Mr. Monson did not bend. Teachings holding homosexuality to be immoral, bans on sexual intercourse outside male-female marriages, and an all-male priesthood would remain unaltered."

Now let's take this apart a bit. vociferous according to the Oxford English dictionary means "Expressing or characterised by vehement opinions; loud and forceful." Weathering in this context means to "withstand"and usually has positive connotations for the subject. So despite vehement opinions and demonstrations he weathered those storms and did not bend. He remained resolute to core doctrines and tenets and refused to bend to public opinions. Why the hell aren't we seeing this as an amazing tribute for a prophet of God? I sure do! Add to this the implied praise they write regarding lowering the age of Sister missionaries, and for opening the church historical department in an "unprecedented era of openness" I read an article that portrays President Monson's stewardship through some difficult times as one of strong leadership, who listened to concerns and changed when he felt it was needed but remained resolute to doctrines as currently revealed by God. And to be completely frank if you feel The Times addressing of these issues constituted an attack upon our church then maybe you should reassess your own position on them? Maybe you're not as comfortable with the church's position as you think you are? And please do not see this as a personal attack on you? Anyone who knows me knows I live for these times. We should be uncomfortable with things at times. We need to be. Because when we're uncomfortable it forces us to evaluate and reassess ourselves.

I do not agree with every policy decision President Monson signed his name to. Our leaders have made mistakes in the past and I have no doubt that we have policies today in our church future generations will wonder at, and we will make more mistakes in the future. And while I am the first to say there are many things that need to change and will change in the church as further light and knowledge are received it makes my heart sing that our prophet is recognised as a man who holds firm to the light and knowledge as he has received it to this point. That our prophet is not a man who is seen as bending to public opinion but will stand firm even if the whole world is against him. Yes there are a couple of sentences in the article that have a tone that could've been better the overall tone of the article is one that I absolutely am proud of.
Posted by Lord Uther of Light at 21:56 No comments: