When Saul comes to church...

As Latter Day Saints we love a great redemptive arc, Saul on the Road to Damascus & Alma the Younger are some of our most beloved stories. We use these as examples to our youth who have strayed, but in our modern everyday world we find it easy to apply these principles to those who have become habitual drug users and repented. To the alcoholic who found sobriety, to the fornicator who found chastity. And let us not forget that rare find the "anitmormon" who gains a testimony of the Book of Mormon and becomes it great advocate. But what happens when a member of our ward is accused of having dabbled with true evil before his conversion? How do we react when we discover that good guy Paul used to be Saul? My ward had to face that very issue the past few weeks.

About 4 years ago the missionaries approached me to help teach a young man, he was very intelligent and had questions they thought I could help with. He was taught, baptised and his testimony grew, and as with most new members he stumbled after his baptism. Transgressions were committed and repentance sought. He got a new job with the police, and unfortunately his working hours made it very difficult to attend church, and that distance didn't help his spiritual journey. He still came to mine regularly, his desire to remain on the covenant path increased as he felt the Spirit and he started putting in greater effort to put those things right in his life. His church attendance remained sporadic due to his work but he became much loved in our congregation and loved them as much in return. 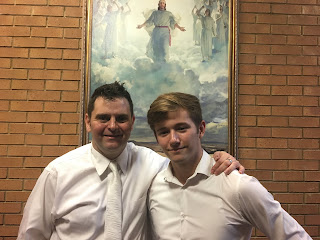 Then last year his world collapsed around him, activities he had been involved in prior to joining the church had been discovered and resulted in the police knocking on his doors at an ungodly hour, seizing his computer, and dragging his sorry arse down to the station.

You see when he was 16/17 he had become with intrigued in far right ideologies, as an undiagnosed autistic youth he then dived down a rabbit hole that would take him far from Wonderland. Mistakes were made. He managed to extricate himself from the group, met the missionaries, found the restored gospel of Jesus Christ and after being on a very dangerous knife edge managed to change his direction. He decided to join the police and do something constructive with his life and a box that the authorities say should've been ticked yes was ticked no, this is the mistake that would explode his world. After an investigation that lasted a year, the Crown Court heard his case and he was convicted of being a terrorist, and the press went to town. Of course the narrative of a young lad who screwed up, had started to turn his life around and was now facing the consequences of that past wouldn't sell papers, but portraying him as the next Hitler definitely would. And that was the story that was broadcast on the 6 o'clock news and all over their websites. This narrative would the first that most of his ward family would read.

They'd just found out that they guy the knew as Paul used to be Saul. My ward is a very multicultural ward, in fact I am one of only a tiny handful of white people that attend, discovering Ben's past was a lot to deal with. Complex emotions ran through the ward, was church safe? Their christianity was tested in very real terms, they learnt to love without judgement. They applied their knowledge that the atonement was truly infinite, that no-one was beyond Christ's sacrifice. None of them have had the opportunity to talk to Ben, to hear his story, a few have been able to hear it from me. They have had to weigh up the man they know now to the boy he was then, and there has been an out pouring of love.

Yesterday I had my first ever prison ministry visit. I spent a day in prison and felt like I had been to the temple. I was able to meet with him in their chapel and we shared, taught and testified. I know there is a purpose in this, it seems unjust that a few pub meets and a bit of graffiti should result in this sentence, but God's hand is in all things. I shared with Ben that as he took this time to develop a closer bond to God and as he committed to living good Christlike principles that he would be a tool for God to help others come home. That there are people in that prison who are seeking God's love and he can be God's instrument in finding them. 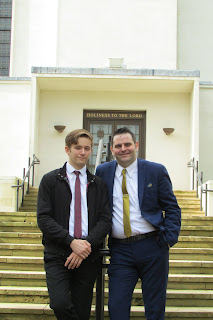 What would we do if Saul walked into church? Well in my little corner of the world I am glad to say...he would be loved!

Posted by Lord Uther of Light at 02:44 No comments: