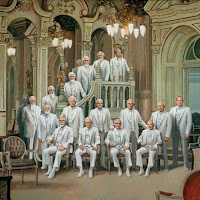 Well, this last week has been quite a rollercoaster of a ride, not with just the policy announcements but with the reactions of people surrounding these policy announcements. Lots of people have been left licking wounds and I have to admit I am one of them, though my wounds have not come from the policy changes but from peoples reactions to them and some of those have left me extremely battered. So much so that when friends have reached out to me to help me find resolution I have felt attacked when there was no attack there, only love and concern, but I have felt very tender at times. So I'm writing this blog post not only in response to certain things that have been posted on the internet but also to clear my mind & get things off my chest in an attempt to move on.

There have been posts that have called into question those of us that have had issues/problems. There have been claims that we are apostates for struggling to come to terms with these policy changes, or for disagreeing with them. That everything that issues forth from the governing authorities is inspired revelation and they cannot make mistakes and we should just fall into line & quit our whinging or leave the church.

"Brigham Young; an American Moses" by Leonard J Arrington. In this Pres Young & Bishop Woolley have had a stand up row over some policy Pres Young wanted to implement and at the end of the row Pres Young retorts to Woolley "Well I guess you're now going to go off and apostatise". Bishop Woolley responded with "Well if this was your church President Young I probably would, but this church is as much mine as it is yours and why should I apostatise from my own church". So I echo that statement, this is my church as much as anyone else's, and I ain't going anywhere. My Heavenly Father made it abundantly clear to me that this is where He wants me & this is where I'll be. Irrespective of the opinion of any member of the church!

So what about struggling to come to terms with new pronouncements from church headquarters, wether they be doctrine or principle? Well, once again I am going to refer back to Brigham Young on this one who when he was first taught the principle of plural marriage said he would rather die. We also know the Joseph Smith also struggled to come to terms with plural marriage and was threatened with destruction if he did not comply. It is also well 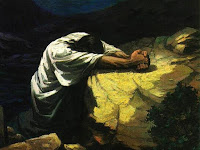 documented that Emma also struggled with, and disagreed with, the principle and continued to do so all her life; well past Joseph's death. Let's look at the great example, our Saviour, even He struggled with what he had to do. In the garden of Gethsemane as the full weight of taking upon him all our sins bared down on him he cried out "Father if thou be willing remove this cup from me." He didn't say this because this was easy for him, he was struggling, really struggling, and he wanted out! But it's the "but not my will but thine" that makes the difference. It's OK to struggle and even disagree with pronouncements that come out of church headquarters, as long as it's accompanied with "but not my will but thine."

So then we come to the last point that everything that comes from the brethren is inspired, comes from God & cannot be wrong; or in other words they cannot make mistakes regarding church policy. Well, anyone who says this seriously doesn't know their church history because there have been many instances where they have been. This has even been canonised in D&C 3 where Joseph Smith is rebuked by The Lord for his mistakes regarding the lost 116 pages. Then we have the case of the Kirtland Safety Society which President Smith set up in Kirtland as a banking system for church members & issued it's own bank notes (which was quite standard in the 19thC for american banks to do). The

bank failed and many members, including members of the 12, lost their investments and Joseph was accused of fraudulently running an illegal bank. The failure of the bank was so shattering that later Heber C Kimball would say that  "there were not 20 persons that would say Joseph Smith was a prophet of God." We also have the ban on those of African lineage from holding the priesthood, a ban which those of my generation and older will remember being believed as doctrine by the church. We were taught that this ban was brought upon by the curse of Cain, I could even argue this point scripturally, and there were those who believed & taught that those born into this ban must've been less valiant in the pre-existence. Today the church admits that the ban was more based upon social beliefs of the time than any divine mandate [in fact believing the African peoples were descended from Cain was a normal 19thC North American christian belief]. If you still disbelieve that church leaders in the past have made mistakes then take it from President Dieter F Uchtdorf who said in his October 13 Genral Conference talk Come Join With Us "And to be perfectly frank there have been times when members or leaders in the church have simply made mistakes. There may have been things said or done that were not in harmony with our values, principles or doctrine." So we can see that in our history our church leaders have made mistakes, some costly, and it would be the height of hubris to think it could not happen today or in the future. 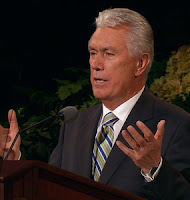 So we can see that it is not an apostate act to struggle with HQ announcements, and that our leaders can make mistakes regarding policy, so why should we follow them? Because their entire agenda is to get souls back to Christ, and while every now and again they make wrong decision that causes the good ship LDS to head into a storm, they will keep us in the right direction. They will get us to our destination. You see when we turn to others for our answers we become subject to their whims, their agendas & their discontent. We become subject to their vanities and their pride. While in Utah I had the privilege of spending some time with an apostle of the Lord and I could feel of his love for us, all of us. As I spent time with his family & saw their values, that he had instilled in them, I could see this was a family with Christ at the centre of their lives. A family that judges people by the content of their heart, not by their actions. Yes, the brethren may make mistakes at times, but the desire of their heart is to get us home. 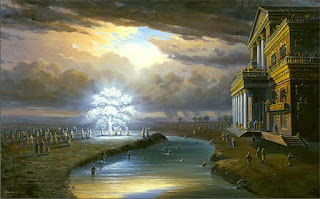 While I was studying the Book of Mormon the other night I was reading about Lehi's dream of the iron rod, along with a Book of Mormon study guide and in it the author points out that the great & spacious building is lifted above the ground, so how do the people get into it? They are lifted up with the pride of their hearts and their vain & foolish vanities, the righteous when they get to the Tree of Life fall to the floor in humility. So while it is OK to struggle with policy decisions made by the brethren, to disagree with some of their decisions, to be hurt & feel pain, and to express that hurt & seek comfort we must be careful not 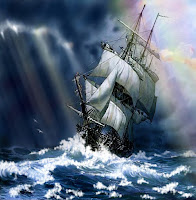 to let that that lift us up in pride. Why is there an Iron Rod on the straight and narrow path unless the Lord knew that the journey may get rough at times and we would need to hold onto something? But we must keep ourselves humble before the Lord and seek His guidance in our lives in how we can use that pain to fuel ourselves forward, to seek the atonement to heal our pain & to forgive those that hurt us. So the next time the good ship LDS hits a storm maybe the true test of discipleship isn't to blindly follow like robots, but as some of our shipmates are tossed about when their safety straps break loose is to wrap our arms around them to help keep them safe rather than grumble and complain because they're not sitting in their seats.