Creationism vs Science...Does There Need to be a War?

In this modern world we quite often see the argument between creationism and what science has learnt about how this world was created. So often it seems that the two are mutually exclusive, and it has become a battle as to who is right, but can they both be right? I believe they can and in this post will endeavour to show that both science & Moses say exactly the same thing, just in different ways. Before we start I am just a layman explaining my thoughts in layman's words. I am no scientist and got all my information watching Nat Geo style documentaries. Naturally all of this is going to be very simplistic and any expert will point out that I probably could've explained things better, this isn't supposed to be a scientific treatise but just some thoughts verbalised to show how in principle science and creationism can go hand in hand.

The first thing we need to do is dismiss this fallacy about the use of "day" in the Genesis account. In the original Hebrew the word is "Yom"  and while this is translated correctly as day it also has other meaning such age, eon, period of time epoch etc. So we can see that the traditional view that the earth was created in seven 24hr periods can also be viewed as seven eons or stages, which gives us a much more realistic time frame for the creation.

So let's start dissecting the first couple of chapters of Genesis and see what we can make of it. We'll start with Genesis 1

1 In the beginning God created the heaven and the earth. 2 And the earth was without form, and void; and darkness was upon the face of the deep. And the Spirit of God moved upon the face of the waters.3 And God said, Let there be light: and there was light.4 And God saw the light, that it was good: and God divided the light from the darkness.5 And God called the light Day, and the darkness he called Night. And the evening and the morning were the first day. 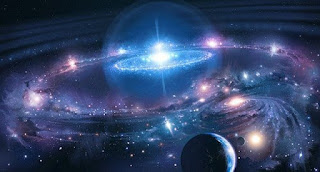 So here we have the initial scene of creation. The thing we must remember here is that this isn't the story of the creation of the universe but of this earth only. What is the first thing we learn about the earth? That it was without form & void. What does science say about this? Well they agree. They tell us that before this solar system existed there was a massive field of stellar debris, this debris is what would form the earth and other planets, and so it is literally the earth but without form, or void.

God then commands "let there be light" then He divided the light from the day. Well science teaches us that as the sun ignited it created a gravity well that the debris field started to rotated around and this debris field eventually coalesced at various points into the planets, which started to rotate in their orbits and creates night & day on their respective surfaces.

So we can see that so far Moses and science agree. 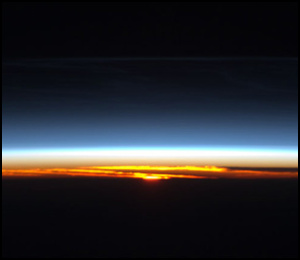 
9 And God said, Let the waters under the heaven be gathered together unto one place, and let the dry land appear: and it was so.10 And God called the dry land Earth; and the gathering together of the waters called he Seas: and God saw that it was good.11 And God said, Let the earth bring forth grass, the herb yielding seed, and the fruit tree yielding fruit after his kind, whose seed is in itself, upon the earth: and it was so.12 And the earth brought forth grass, and herb yielding seed after his kind, and the tree yielding fruit, whose seed was in itself, after his kind: and God saw that it was good.13 And the evening and the morning were the third day.


Well here we have God commanding the water and the land to separate, the land into one place and the seas into another. So why would Moses who had been raised as an Egyptian prince and know full well that there were separate lands and continents say that once there had been only one land mass? Because it was true. And modern day scientists call that super-continent Pangea.

Next God brings forth the world's vegetation and once again science would agree. Science teaches us that the first forms of plant life formed in the oceans which produced oxygen to create the atmosphere we have today. Within this oxygen rich atmosphere vegetation then spreads to dry land. 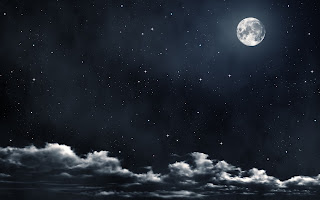 Now I will hold my hand up admit this event is a little bit harder to fit into the scientific account but we know that this solar system is fairly old in the life of the universe and it would have taken many thousands of light years for the light from newly created suns to reach earth and become visible in the night sky, so it is very feasible that in the early stages of the Earth's life that the sky would've been fairly dark. As to why Moses only now mentions the sun & moon I have no idea but I do feel safe in saying it was because of perception rather than these elements only appearing at this time because we can see back in the first verses the creation of the sun in the phrase "let there be light".


20 And God said, Let the waters bring forth abundantly the moving creature that hath life, and fowl that may fly above the earth in the open firmament of heaven.21 And God created great whales, and every living creature that moveth, which the waters brought forth abundantly, after their kind, and every winged fowl after his kind: and God saw that it was good.22 And God blessed them, saying, Be fruitful, and multiply, and fill the waters in the seas, and let fowl multiply in the earth.23 And the evening and the morning were the fifth day. 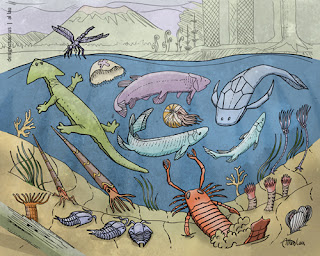 In these verses we can see the beginnings of life being created on the planet. Moses tells us that the first life came forth from the seas, and once again science agrees totally with this. We can possibly tease this out a bit more, we see God creating large whales that were brought forth from the oceans, could Moses here be describing in his limited way the advent of the dinosaurs? Obviously this is highly speculative, and while fun to ponder, doesn't change that Moses correctly teaches us that life formed in the seas first.

Now here we see that on the fifth day God has 2 creative episodes. First we see that God creates life on 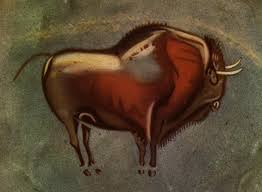 the land, or specifically cattle & beasts of the field, and we know from science that the rise of mammalian life is what paved the way for man's appearance. Next God creates man himself after his own image and gives them their first commands. Here God commands them "I have given you every herb bearing seed, which is upon the face of all the earth, and every tree, in the which is the fruit of a tree yielding seed; to you it shall be for meat. And to every beast of the earth, and to every fowl of the air, and to every thing that creepeth upon the earth, wherein there is life, I have given every green herb for meat". And what is this command? It sounds like to me that they are being commanded to be hunter gatherers, to eat the fruits of the tress & beasts of the field, and we know that the first men were indeed hunter gatherers!


2 Thus the heavens and the earth were finished, and all the host of them.2 And on the seventh day God ended his work which he had made; and he rested on the seventh day from all his work which he had made.3 And God blessed the seventh day, and sanctified it: because that in it he had rested from all his work which God created and made.4 These are the generations of the heavens and of the earth when they were created, in the day that the Lord God made the earth and the heavens,5 And every plant of the field before it was in the earth, and every herb of the field before it grew: for the Lord God had not caused it to rain upon the earth, and there was not a man to till the ground.6 But there went up a mist from the earth, and watered the whole face of the ground. 7 And the Lord God formed man of the dust of the ground, and breathed into his nostrils the breath of life; and man became a living soul.

And thus we hit the seventh day and God rests. Forests rise and fall, continents move. Fossils are formed, coal veins and oil fields from dead forests are created and the earth is prepared for the rise of civilisation. And in these verses we note that 'there was no man to till the ground', in other words there was no farming. Now every anthropologist/historian will tell you that it was the advent of farming that is the key to the rise of civilisation. It was with farming that we learnt to alter our environment around us and the scholars will tell us that 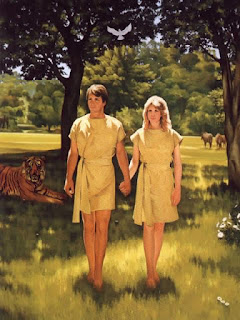 every invention, every advance in the modern world comes from the advent of farming. In the last verses we see that a mist rises up and waters the whole face of the ground...I speculate that this is Moses account of the last great ice-age, which ended approximately 10,000 years ago, and it was after this event that man really took off, and it's after this event that God creates Adam & Eve. The whole Garden of Eden events occur & Adam & Eve are cast out and told "Thou shalt not eat of it: cursed is the ground for thy sake; in sorrow shalt thou eat of it all the days of thy life. Thorns also and thistles shall it bring forth to thee; and thou shalt eat the herb of the field. In the sweat of thy face shalt thou eat bread, till thou return unto the ground; for out of it wast thou taken: for dust thou art, and unto dust shalt thou return." Here Adam is told by God that he will need to farm the land to be able to survive, and that he would now die & return to the earth, and it is from Adam that all civilisation descends.

Now I have no doubt that someone who is well versed in the science of these events would be able to spot many over simplifications and errors in my account, but I hope we can see that if we give Moses a bit of slack then we can see that in regards to the principles of creation that he got it pretty spot on. Moses while being prophet was still a man of his time and when shown in vision the creation of this earth may very well not have understood the scientific process he was witnessing, and even if he did he had to explain it to a superstitious people who had no concept of science. I think if we give him this slack and accept that he's trying to explain in abstract difficult & complicated processes he actually gets it pretty spot on!

Just because scientists today are able to explain the process and remove the sparkle of the miracle it doesn't negate the hand of the Creator, the architect who designed it all, the one whose voice commanded the events. We have to allow the ancient prophets to be men of their time, just as we today are men of our time and allow each to teach according to their understanding.