The Book of Abraham: Another Testament of Joseph Smith (Part 1)

Well one of the biggest attacks on the church has been Joseph's translation of the Book of Abraham, and it has become one of the most controversial because now that we are able to translate Egyptian we can verify how accurate a translator Joseph was. First we need to set the background.

History
In 1835 when Joseph came into possession of some mummies and Egyptian papyri the Egyptian language was a dead language, well not dead but definitely asleep! It was untranslatable. Now the Rosetta Stone had been discovered by this point which would crack the code but it wouldn't be until the 1850's that that would happen, and at this point only the top egyptologists would have access to it at the British Museum. So Micheal Chandler approached Joseph in Kirkland in 1835 as he had heard of Joseph's ability to translate dead languages and hoped to sell a bunch of mummies and scrolls he had been commissioned to sell. Joseph looked through the mummies and recognised them as being written by the hand of Abraham and immediately set about raising the $2500 asking price. He translates the scrolls and eventually they get published as the Book of Abraham, to be canonised as scripture in the Pearl of Great Price in 1880. Lucy Mack Smith opens a 'museum' of sorts and as word of the translation spreads charges people a small fee to see the mummies and scrolls to try and recuperate some of the costs in buying them.


After Joseph's death the artefacts pass through several hands to be lost again to the world...to be partially rediscovered in 1966 and bought by the church in 1967. Authenticity could be established as the fragments found were still attached to paper which also had drawings of Kirkland temple and maps of the area, but it's estimated that only about ⅓ of the original manuscripts had been discovered. Also they had been damaged by the great Chicago fire and flooding of the museum. This caused great excitement both inside and outside the church because by now the Egyptian language was easily translatable and finally we have an empirical test to examine Joseph's claims.

And this is where it becomes problematic...

Experts examine the fragments and they are discovered to be experts from the Book of Breathings which is effectively a cliff notes version of The Book of the Dead, an Egyptian funerary text, of a high priest named Soter and buried in Thebes in the 1st century BC. Joseph fails the test...or does he?

Ancient Teaching Styles
So before we get into this I need to introduce you to an ancient teaching style that hid higher teachings inside common teachings as introduced to me by reading Hugh B Nibley. First lets read John 1:1

Now Nibley teaches that the word logos its correctly translated here as word, but that it can also be translated as counsel/council, now lets reread that with that knowledge.

Now to an LDS mind this brings a whole new deeper meaning to this verse, and this was a method used by the ancients that would hide deeper knowledge that only the initiated would understand.

Now with this in mind let's look at there scrolls that were found... 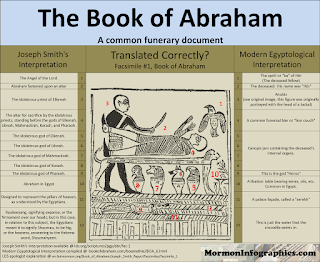 Now taking that let's take a look at facsimile 1 from the Book of Abraham, above is a graphic I found online which perfectly shows Joseph's interpretation vs the egyptologists. Before we get into this we have to remember that Joseph's knowledge of Egyptian culture and religion would have been zero, and had no frame of reference for anything he saw here.

So first of all Joseph says this is Abraham about to be sacrificed by the priests of Elkenah, in the Book of the Dead this is an image portraying the process of mummification. Both are religious rituals centred on death.

#1 Joseph identifies this as an angel, whereas in the BotD it's identified as the soul of the departed. As mormons we know that angels are visitations of those who have lived or who will live on this Earth...so both translate this as an angel.

#2 Both are translated as the object of the death ritual.

#3 The BoA represents this as a priest of Elkenah. The above graphic doesn't give the full translation of this but in the BotD this is Anubis about to start the mummification process. Obviously Anubis himself doesn't do this, so in the ritual we have a priest perform it in place of Anubis. So in both we have a priest represented here.

#5,6,7&8 Now Joseph says that these are images representing 4 gods, and we know today that these are actually 4 canopic jars in which the innards of the deceased are placed during the mummification process. Big miss hey? Not really. The four jars represent the gods Hapi, Duamutef, Imsety and Qebehsenuf. The names maybe different but he correctly identifies these as Gods of Egypt.

#9 BoA says this is the god Pharaoh, the BotD says this is the God Horus. Now other than both being correctly translated as gods, and also recognising that there was a cult of Pharaoh, Pharaoh was recognised by the Egyptian religion as the physical incarnation of Horus in life. A home run hit by Joseph there!

#10 Not sure I fully understand the connection between these. Holding my hands up there.

#11 Now Joseph says this is supposed to represent the pillars of heaven as the Egyptians understood them, Egyptologists say this is a serakh which represents the palace of Pharaoh. As explained earlier 9 clearly represents the god Pharaoh. The heavens are where a god lives...definitely a strong connection there.

#12 The image above rise to dismiss this as 'just the water the crocodile swims in' but the crocodile is a god and so the water becomes the dwelling place of a god. In Genesis one, the heavens are more than once represented as 'waters'. The heavens being where gods dwell.

As you can see time and time again Joseph Smith correctly identifies the principles behind each of the representations. Once again I will re-emphasise that at this point in the 19th century almost nothing was known about Egypt, so for him to hit this ball again and again and again categorically proves that Joseph did translate these correctly. Especially when we add into the mix what Nibley teaches us about hidden teaching inside common imagery.

The Scrolls
Now lets look at the scrolls themselves. The main claim is that translating the papyrus that we have it becomes clear that they are excerpts from the The Book of Breathings and just plain old funerary texts, so therefore Joseph's translatation is wrong. Well there's one thing we need to establish first, are these the actual scrolls Joseph used to translate the Book of Abraham? Well we're not certain how many scrolls were recovered and how many are still missing,  but we definitely don't have them all.

So we need to look for other evidence. Is there a description of the scrolls used? Fortunately yes! Joseph himself gives us a description. "The record of Abraham and Joseph found with the mummies is beautifully written on papyrus, with black and a small part red ink or paint, in perfect preservation"

So lets look at images of the papyrus courtesy of wikipedia: 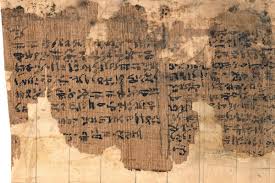 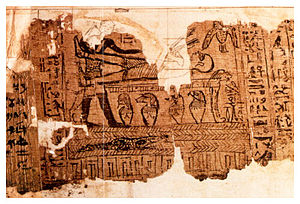 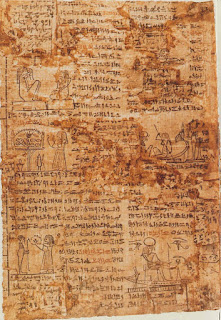 So first of all are these beautifully written? Well no, Nibley describes them as having a feel of being written in a rush, and anyone who has seen other examples of Egyptian writing would agree, these aren't great examples of the beauty of Egyptian writing. They do have examples of red ink though, but what about the preservation of them? Now that is a difficult one because as mentioned earlier they were involved in a fire, and water damage from flooding, and they probably weren't stored in optimal conditions. While the water damage can be seen on the above, what about the other damage? Well these were pasted to paper by Joseph  and the surrounding paper isn't  that badly effected. And we can see the head from the facsimile is missing, and it looks as if they were pasted on to the paper in that condition, so no not in perfect preservation. I think the evidence that we have more than strongly supports that these scrolls are not the scrolls that Joseph translates the Book of Abraham from.

So we now have to deal with who wrote them? Well, Joseph Smith absolutely declares these scrolls to be written by the hand of Abraham, but as we discussed earlier they were found in the tomb of Soter, a high priest buried in the first century A.D. So how do resolve that one? Quite easily actually. Who painted the ceiling of the Sistine chapel? Michelangelo right? That's easy, but wrong. While Michelangelo definitely painted the important aspects of the ceiling, the background etc would have probably been painted by students of his under his supervision. This was perfectly normal and most of the super sized great works were painted like this, but we only credit the master with the work. The Egyptians dealt likewise. In fact regards written works Nibley informs us that no matter how many times a scroll was copied by scribes, it was still considered to be written by the hand of the original author. So even if the original author was several thousand years earlier under Egyptian tradition a scroll would still be considered to be written by his hand. We also know that there are unique hieroglyphs on these common texts that only exist on the Joseph Smith papyrus, which definitely suggests that are things in regard to these texts that make them special. So in conclusion, even though these scrolls are a couple of thousand years one would have to prove that the original that the scribe copied it from was written by someone else other than Abraham. Now while proving that it was would be just as an impossible task, that Abraham would hide hidden knowledge for the initiated is perfectly feasible, and in the next part of this post I will absolutely prove beyond a doubt that Joseph Smith knew exactly what was in the scrolls we do have.

While my study of Egyptology as a teenager has definitely helped me in this study a major source for me in the writing of this blog has been his book The Message of the Joseph Smith Papyri and other works of his. I would love to specify which ones but over the years I have unfortunately forgotten where I got what... But if you can't wait for my next part which will be a few weeks away, then The Message of the Joseph Smith Papyri can be purchased from Deseret Books here