So the last few days have a been a torrid time following the murder of George Floyd at the hand of 4 Minneapolis police officers. Unfortunately this hasn't been an isolated event but the latest occurrence in the systematic murder of people of colour in the United States by various police forces across the country, there can be no doubt there is a massive racist problem in those institutions. This sparked protest that night in Minneapolis and as of last night similar protests across the states have been

ignited and violence has broken out at many. All our Facebook feeds have been filled with images of Minneapolis in flames as the protests turned into riots and last nights police cars were over turned and set on fire in Salt Lake City. Understanding has turned to condemnation from various sources regarding this violence, feeling that such actions are the conduct of violence hungry louts rather than legitimate protestors. Now in there is some mileage with this view, especially when the Governor of Minnesota has said that a good portion of those arrested came from out of state, and there appears to be good evidence that White Supremacist  movements have infiltrated the riots to escalate them and turn public opinion against the protestors. I also absolutely agree that peaceful protest should always be the go to form of all protest, but what happens when peaceful protests are being ignored? 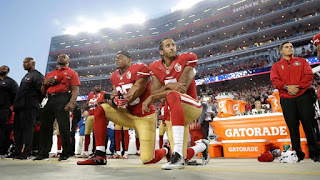 Now it could be argued that the protests against George Floyd should remain peaceful, that was the go to for this incident, but this isn't an isolated incident. This is the latest event that has garnered international attention in a string of too many in several years. Frankly peaceful protests have been ignored. It started when various sports stars in the USA took the knee during the playing of the
national anthem, and it destroyed careers. Massive outrage followed, this being seen as a sign of massive disrespect to the flag and those who died fighting for the freedoms it represents. I genuinely don't get this because here in Europe taking the knee means to show great respect, for example during the Queen's coronation the peers of the realm kneel before her to pledge their fealty, but this isn't my culture and I can't impose mine upon it. Saying that it was peaceful, it made the point and conversations were had. Frankly, also, he didn't scream, shout, swear, trample the flag on the floor or burn it so there could've been so many more disrespectful ways to make that protest.  The outrage was real so those who followed him chose different ways, because sadly his protest failed to implement change.

More stories came to light of the struggle PoC face with law enforcement in the States. Unfair stop and searches, overly aggressive arrests, we've all read the accounts. As awful as the killings were it became evident these were the tip of the iceberg of the fear and persecution PoC face just for being black on a day to day basis. Protest marches were organised by Black Lives Matter which caused

disgust and outrage...how dare you block the road and discommode my day? Even the name of the organisation caused controversy as white folks deemed that "obviously" they were saying white lives don't. Of course white lives matter too, but unfortunately too many fail to have the same sacrosanct attitude to black lives as they do white, and yes maybe the organisation could've named itself Black Lives Matter Too so that the white folk don't feel "persecuted'. But why should they? Sorry if your feeling are hurt here but black people are suffering way much more than semantic issues that burn your arse. Time and time again the peaceful way has failed as the people in power have decided to take offence at the method rather than listen to the hurt. As Martin Luther King said "a riot is the language of the unheard"

So why is the title of this post "Mormon Lives Matter"? Well last night as I was skimming through my Facebook feed Deseret News was posting about the protests in Salt Lake City, and a picture of an overturned police car on fire was among those posts. Members of the church were quite vocal in their disgust at these protests, and abhorred that members of the church would be among them, because

obviously members should refrain from violent protest. Shouldn't they? Well Rosie Card, the founder of Q.noor temple dresses, made a post a few days ago comparing this action today and Joseph Smith's destruction of the printing press in Nauvoo, and pointing out the persecution we faced and our historical reaction to it. So I decided to look into this aspect of our history and our reaction to it.

We all know the stories of the persecution we faced from the mobs in the 1830-40's in the USA. Our farms were burnt, our women raped and our men and children killed. The Governor of Missouri even issued the extermination order making it legal to murder a member of the church. Joseph sought many times for legal respite from these horrors, taking it right to the top and visiting the President of the United Staes, all were ignored. Joseph was murdered  by these and we were forced to leave the US and head into Mexico and founded the territory of Deseret. Unsurprisingly Joseph went to the Lord regards to how the Saints should react to these persecutions and the Lord's reply can be found in D&C 98:23-31 and the outline of this is as follows. that if a men will come at you smite you or your families once that you should bear it with patience and seek no retaliation, and the same the second, third  times too. That these 3 testimonies will stand against them in the Lord's eyes and cannot be blotted out if he refuses to repent. This is where it gets interesting. If they come at you a fourth time if you will also bear this with patience then the Lord will bless you and your posterity unto the 4th generation. BUT. The enemy is now in your hands and if you "reward him according to his works" you are now justified before the Lord in your actions! In vs 32 He then goes onto say that this a law he has given to all His people 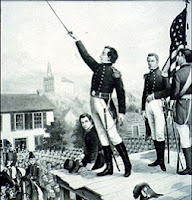 through history. Let us remember that twice in our history Joseph raised an army to deal with the mobs, the first being Zion's camp and the 2nd the Nauvoo Legion. In June 1843 the prophet makes this statement "if Missouri continues in her warfare...I will turn up the world-I will make war". All this culminates in 1844 with the destruction of the Nauvoo expositor printing press.

So before we rise ourselves up in righteous indignation at the events post George Floyd's death let us remember 180 years ago this was us! WE were the ones suffering under these awful conditions, let us remember our history and our reactions to that oppression. We too retaliated, we raided the farms of our persecutors, burnt property and more. Mormon raiders had their part to play in the story of our persecutions and we considered ourselves justified in our actions.

To be clear I am NOT giving out a call to arms, to rise in violence with the protestors of today, but let us at least have empathy for their position. Let us remember when we cried out to an unlistening world "Mormon lives matter" and were ignored. Let us remember our past and use that to find a resolution that ends the racism and atrocities PoC all over the world suffer. Let us use our past to ensure that no-one ever has to resort to violence to have their voice heard. Let us remember the words of brother Joseph when he said "if it has been demonstrated that I have been willing to die for a Mormon, I am bold to declare before Heaven that I am just as ready to die in defending the rights of a Presbyterian, a Baptist, or a good man of any denomination; for the same principle which would trample on the rights of the Latter-day Saints would trample upon the rights of the Roman catholics, or of any other denomination who maybe be unpopular and too weak to defend themselves. It is a love of liberty which inspires my soul-civil and religious liberty to the whole human race."

If we wish to wipe the stain of the priesthood ban from our collective, what better way than to stand with our African brethren now.